Why has racial progress been so slow since the Civil Rights Act was passed fifty years ago? 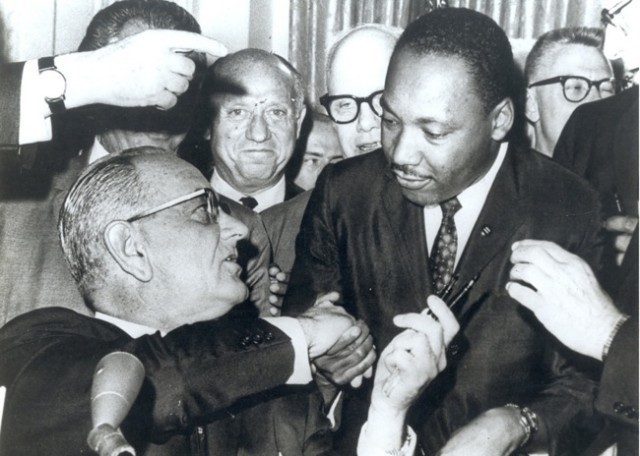 Later this year it will have been fifty years since President Lyndon Johnson signed the Civil Rights Act. We have seen some progress in the circumstances of race in the United States. But we have also seen persistent stagnation of the major gaps that exist between white and black Americans in the most important components of quality of life – health, employment, education, property ownership, and longevity, for example.

Why is racial inequality so sticky in the United States?

If I had to single out one primary factor, I would point to the continuing residential segregation of American cities. Segregation in housing is implicated in almost all the forms of social disadvantage experienced by black families in America today. A large portion of black America is crowded into high poverty, low quality-of-life inner cities across the country (link). Schools are typically poor and ineffective – not uniformly, but often enough to constitute a major factor in black disadvantage. In many cities public transportation is limited, so job opportunities outside these neighborhoods are hard to get to. These neighborhoods are often located in food deserts and food swamps, they offer few amenities when it comes to recreation and parks, and all too often they are subject to elevated environmental exposures, resulting in higher rates of diseases such as childhood asthma.

So, once again, why have the expected processes of gradual social mobility not worked to dissolve the racial gaps that were so pervasive during the 1950s and 1960s in the United States? Slavery, Reconstruction, and the Jim Crow years are long behind us; but the inequalities that exist between white and black families continue to be profound.

It is hard to avoid thinking that W.E.B. Dubois had it right in The Souls of Black Folk in 1903: America has a special problem, really a collective mental illness, when it comes to its African American population. There are other groups in America who suffer disadvantages in our society as groups. But the glacially slow pace of intergenerational mobility seems to afflict only the African American population. And if you reject the idea, as I do, that the African American community is itself responsible for segregation and poor social mobility, then you are pretty much forced to go for the idea that racial prejudice and discrimination continue to drive decisions and outcomes, both as individuals and as policy makers.

There is plenty of evidence from social psychologists showing that Americans react differently to white people than they do to black people. Most interesting is some recent work using brain imaging technology. The work implies that racial perception is deeply embedded in our cognitive systems, presumably as a result of social learning. So it isn’t implausible to hold that stereotype and prejudice continue to affect the decisions that lead in the aggregate to stunted lives for black people. (Here is a fascinating paper, “Separable Neural Components in the Processing of Black and White Faces”, by William Cunningham and several co-authors in Psychological Science on the neurological correlates of racialized facial recognition (link). And here is some relevant research from the Brite Center at UCLA on the neural effects of discrimination on those on the receiving end.)

What we seem to confront in contemporary society is a set of social arrangements and structures – education, transportation, training, health provision, housing, employment – that work dynamically to create continuing disadvantage for the African American population. And it seems likely that these unfavorable structures are maintained by a persistent if often unconscious pattern of prejudice and discrimination on the part of many Americans. These factors are not determinative; talented young African American women and men do in fact succeed at the highest levels in our society in spite of these barriers. But they are a drag on the success of the average or unlucky young person; and overall, this results in continuing disadvantages that are strongly sorted by race.

(For readers who want to pursue this question further, Elizabeth Anderson’s The Imperative of Integration is a good place to start, as is Massey and Denton, American Apartheid: Segregation and the Making of the Underclass.)

America is a rich nation. But many of its citizens live in deeply entrenched poverty (46 million, with 20.6 million in extreme poverty), and the country hasn’t made much progress for decades. Why is that? Peter Edelman has a few theories... Continue →