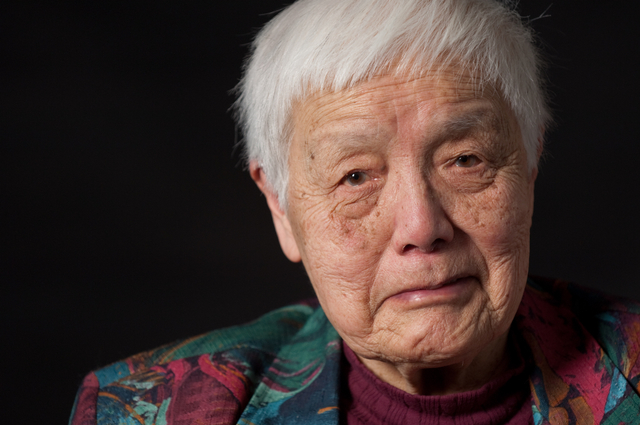 I was able to visit with Grace Lee Boggs this week at her home in Detroit, along with several of her fellow activists involved in the project of re-envisioning urban America.

Dr. Boggs is a truly exceptional American. She has been steadfast throughout a life of activism in support of equality and freedom for all Americans. She has been an anti-racism activist since the 1940s, and she has been tireless in support of economic opportunity and economic equality for the powerless in industrial America. And now, at the age of 99, she is devoting her thinking and speaking to the task of helping urban Americans create more satisfying lives for themselves outside the casual cruelties of contemporary capitalism. For her and her fellow activists it is a question of “reimagining the American dream” (NAR 10). The James and Grace Lee Boggs Center to Nurture Community Leadership (Boggs Center) is a dynamic and counter-hegemonic location for urban activism and community thinking in Detroit.

Boggs’ autobiography, The Next American Revolution (with Scott Kurashige, a professor of American Culture at the University of Michigan), is a powerful and reasoned statement of the kind of activism that Boggs thinks will help us in the twenty-first century. (Her earlier autobiography, Living for Change, appeared in 1998 and is also well worth reading.)

Scott Kurashige’s excellent introduction to the book provides the context for the current thinking that is taking place around Grace Lee Boggs.

Because the future is more uncertain than ever, these perilous times are also precious times. Collectively, we have a window of opportunity to rediscover the nonmaterial things that bring us joy and fulfillment. I have learned to savor four-year-old every minute of time with my four-year-old daughter not only because I know how quickly children grow up but also because I have no idea what state the world will be in when she is my age. Willit be a world torn apart by famines, pandemics, and wars over vanishing supplies of oil and freshwater? Will crises for humanity prompt a resurgence of racism, patriarchy, jingoism, authoritarianism, or other forms of dehumanization we once thought anathema to a modern sensibility? Time is most precious, however, because we can still act to avert the worst consequences of human-induced catastrophe in the twenty-first century. (1)

And here are the closing words of the introduction:

More than anything else, tackling a systemic crisis and moving from degeneration to reconstruction requires us to be creative in a dual sense. These perilous times call for us to be both imaginative and generative. Time is precious. History awaits our response. (27)

Here are some of Grace Lee Boggs’ own words on these topics:

It has been my good fortune to have lived long enough to witness the death blow dealt to the illusion that unceasing technological innovations and economic growth can guarantee happiness and security to the citizens of our planet’s only superpower. (29)

This conforms to the conversation that we had in Grace’s living room earlier this week: all of us (conservatives and activists alike) need a new paradigm of what is needed for a good life. The materialism that is held in common, ironically enough, between neoliberalism, neoclassical economics, and Marxism alike – that happiness is the result of a rising basket of goods available for our enjoyment – is the target of Boggs’ critique:

Are we prepared to develop a whole new form of solidarity economics emphasizing sustainability, mutuality, and local self-reliance? (29) Can we rebuild, redefine, and respirit [our post-industrial cities] as models of twenty-first-century self-reliant and sustainable multicultural communities? Who is going to begin this new story? (30)
Yet rather than wrestle with such grim realities, too many Americans have become self-centered and overly materialistic, more concerned with our possessions and individual careers than with the state of our neighborhoods, cities, country, and planet, closing our eyes and hearts to the many forms of violence that have been exploding in our inner cities and in powder kegs all over the rest of the world. (33)

So Boggs and her associates have turned in the direction of community self-sufficiency – urban farming, small-scale manufacturing, neighborhood self-governance, and a less materialistic conception of the value of one’s life pursuits.

This is a different vision of progressive change and twenty-first century activism. And it is truly powerful to see how these ideas have developed through the seventy-five years of Grace Lee Boggs’ adult life. She is certainly right: this is a new paradigm. Only time will tell whether it is a feasible form of life for America in the coming decades.

Here is a good video interview by Amy Goodman with Grace Lee Boggs about Detroit’s present and future.

Why has racial progress been so slow since the Civil Rights Act was passed fifty years ago?

Later this year it will have been fifty years since President Lyndon Johnson signed the Civil Rights Act. We have seen some progress in the circumstances of race in the United States. But we have also seen persistent stagnation of the... Continue →